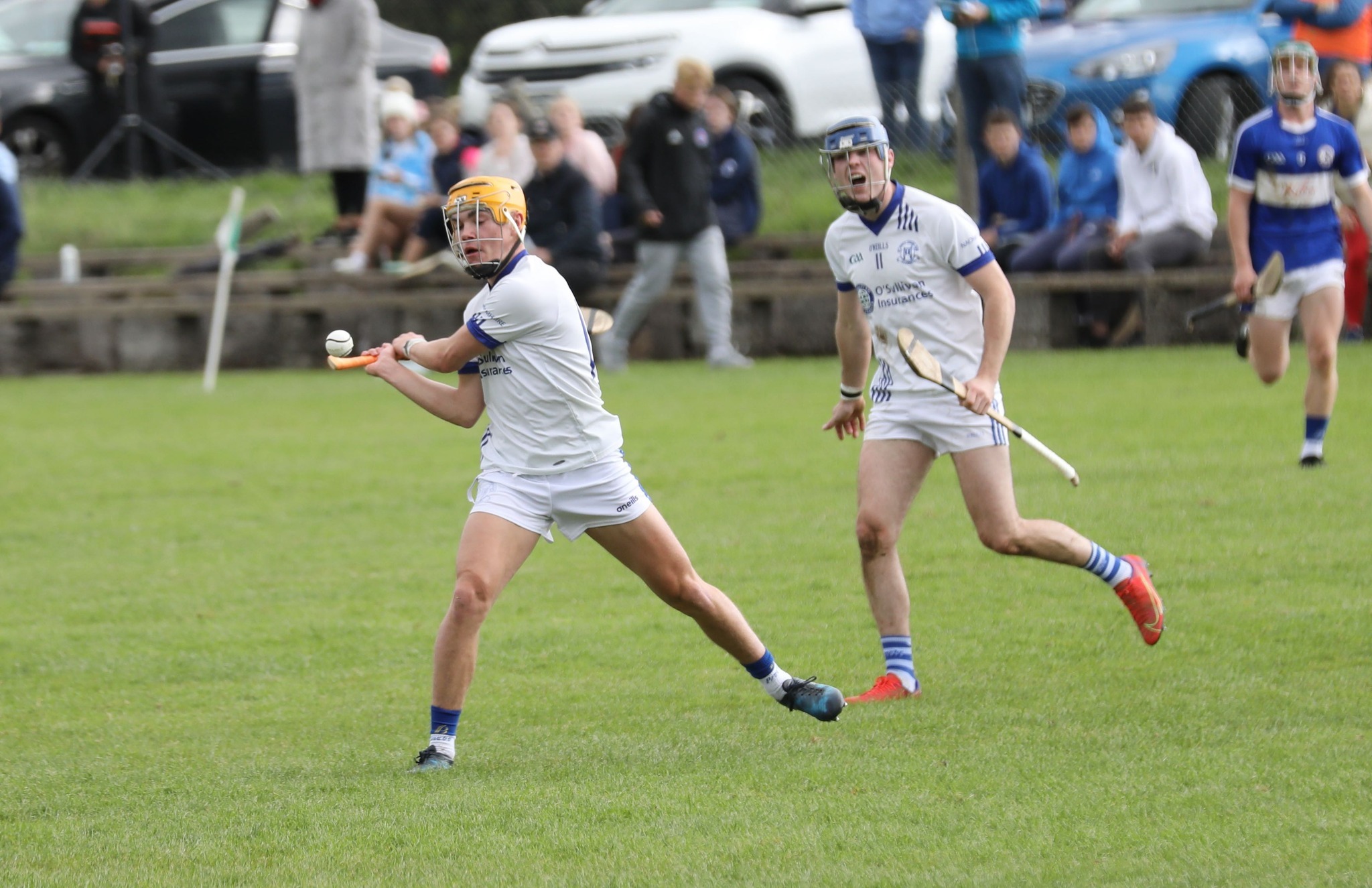 St Mary’s are through to the last four of this year’s Tipperary Premier Intermediate Hurling Championship after a storming final quarter from the Clonmel side saw off the challenge of Silvermines at Holycross on Sunday afternoon.

In the final 15 minutes of this quarter-final clash, the South Tipperary side outscored their opponents eight points to one, and were fully deserving of a semi-final place, Silvermines having failed to score from play over the entire second half.

At the interval, having played with the breeze, St Mary’s led by 1-8 to 1-7, and looked like they would have it all to do to win from there. A disappointing third quarter followed, in which both sides failed to score from play, leaving the sides level at 1-10 apiece and Silvermines still looking the more likely winners.

However a storming finish from the southerners, which included six points from play from Peter McGarry (2), Josh Ryan (2), Jason Lonergan and Seamus Kennedy, saw them emerge as comfortable victors at the final whistle.

They now go into the last four draw with Roscrea, Gortnahoe/Glengoole and Burgess and if they can improve again on this performance they could yet have a big say about that coveted Dan Breen Cup place for next year.

The intensity of St Mary’s second half performance in particular was key, a real determination demonstrated when Silvermines levelled matters for the fifth time in the 45th minute.  Only once though, for a minute in the first half, were St Mary’s headed (1-7 to 1-6), sticking to their task to eventually see off ‘The Mines’ who once again were over-reliant on Jason Forde. Apart from Forde’s eight frees, Silvermines scored just 1-3 from play, and while they got away with it the last day against Carrick Swan when Forde scored 0-17, it was never going to be enough to see them through on this occasion.

After the opening five minutes the Clonmel side led 0-2 to 0-1, all frees from Sean Kennedy (2) and Jason Forde. St Mary’s got a huge boost in the sixth minute, when corner-forward Cathal Deely did well to shake off a couple of challenges before providing the on-rushing Peter McGarry with a perfect pass from which he rattled the net.

That early four points head start for the Marys was quickly halved with two white flags inside a minute from county man Jason Forde, the second of these was to be his only point from play in the entire game. But while Silvermines were getting on plenty of early ball, five wides inside the opening 10 minutes would come back to haunt them.

In the 13th minute St Mary’s added another point from a long-range free by  goalkeeper Enda Dunphy but it was almost immediately answered by an Andrew Hayden point for Silvermines to leave the Clonmel side 1-3 to 0-4 up at the end of the first quarter.

St Mary’s corner-forward Josh Ryan, influential throughout, put in a great effort to set up Seamus Kennedy for an 18th minute point before Jason Forde nullified that when converting a free he had won himself.

Gavin Ryan with a huge point from halfway then extended the Marys advantage to three but they were rocked in the 25th minute by an equalising goal scored by Silvermines Conor McKelvey.

A move that was started in the Silvermines backline with a great catch and clearance by Ronan Sherlock saw an effort come down off the upright at the other end of the field where McKelvey reacted quickest to make space and blast past the despairing St Mary’s defence.

Enda Dunphy and Jason Forde exchanged further frees before a point from play from Silvermines captain Oran Quirke put his side ahead for the only time in the game in the 29th minute. By the half-time whistle, St Mary’s had regained a slight advantage with two late points, both excellent scores, from Sam Ryan and Ruairí Leahy from the sideline.

The third quarter was a tense and mistake-ridden period, Silvermines in particular guilty of missing chances with Forde wide from two frees and an attempt from play he would normally convert. Five frees was all that this dour 15 minutes of hurling produced, but Silvermines with three placed balls from Forde against two from Sean Kennedy, had once more drawn level. That though was as good as it would get though for the Sean Quirke-managed northerners.

Sam Ryan was involved in creating the space for his brother Josh to land the lead point for St Mary’s in the 46th minute and two minutes later Josh landed another on the run to double that advantage.

Over the next four minutes Brendan Cagney’s side would add on four more white flags to put clear distance between themselves and their opponents. A pair of Peter McGarry points (one a huge effort from the sideline at half-way) and two Sean Kennedy frees.

Six minutes from time Silvermines had their final score of the game, another Jason Forde free, before St Mary’s finished with two more from play from Jason Lonergan and Seamus Kennedy, with half-time substitute Ross Peters playing a big part in the making of both scores.

Despite some anxious moments along the way St Mary’s will be delighted to be still standing in this competition. There was a lot to be admired about their determination and the intensity they took to their opponents in the second half, after a disappointing opening half-hour. Seamus Kennedy was pivotal at centre-back with Joe Gunne and Sam Ryan solid in that defence also. James Morris at midfield did a lot of good work in containing the threat of Jason Forde, while in the forward division Josh Ryan, Gavin Ryan, Peter McGarry and Ross Peters stood out.

It was a disappointing year’s end for Silvermines who failed to find top gear hitting 13 wides, many of which would have gone over on another day. There also seemed a little sense of panic in going low with frees too early, efforts that reaped no rewards, with points there for the taking.

Jason Forde was their best on the day but others to play their parts were Ronan Sherlock, Michael Corcoran, Oran Quirke, Conor McKelvey and Colin O’Brien.

For the month of December, we are adding two €50 lucky di...

Congratulations to our U14 and U15 players who have been ...

Monday means only one thing these days...it's club lotto...

After four years of commitment, honesty and effort, outgo...

As another year of games comes to a close, the club would...

Reminder that the club AGM is on tomorrow evening Friday ...

Get live information for Club on the ClubZap App